I’ve never been famous enough in tech circles to warrant a post on uses this, but the joy of running your own blog is that you get to indulge any narcissistic tendencies with no filter. So here we go! 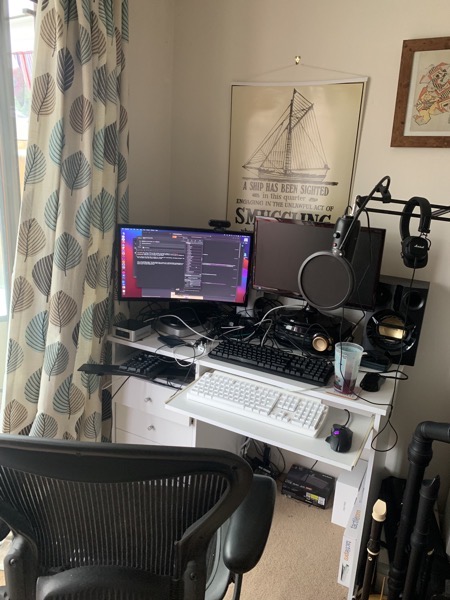 This is the desktop setup. The idea behind this is that it’s a semi-permanent configuration so I can get really comfortable, using the best components I have access to to provide a setup I’ll enjoy using. The main features are a Herman Miller Aeron chair, which I got at a steep discount by going for a second-generation fire sale chair, and an M1 Mac Mini coupled to a 24″ Samsung curved monitor, a Matias Tactile Pro 4 keyboard and a Logitech G502 mouse. There’s a Sandberg USB camera (which isn’t great, but works well enough if I use it via OBS’s virtual camera) and a Blue Yeti mic too. The headphones are Marshall Major III, and the Philips FX-10 is used as a Bluetooth stereo.

I do all my streaming (both Dos Amigans and [objc retain];) from this desk too, so all the other hardware you see is related to that. There are two Intel NUC devices (though one is mounted behind one of the monitors), one running FreeBSD (for GNUstep) and one Windows 10 (with WinUAE/Amiga Forever). The Ducky Shine 6 keyboard and Glorious Model O mouse are used to drive whichever box I’m streaming from, which connects to the other Samsung monitor via an AVerMedia HDMI capture device. 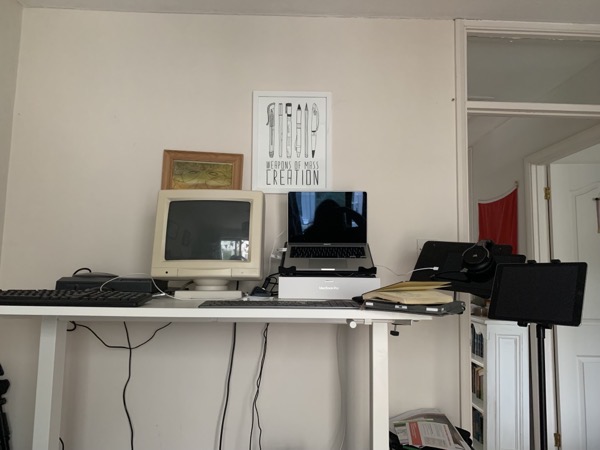 The laptop setup is on a variable-height desk (Ikea SKARSTA), and this laptop is actually provided by my employer. It’s a 12″ MacBook Pro (Intel). The idea is that it should be possible to work here, and in fact at the moment I spend most of my work time at it; but it should also be very easy to grab the laptop and take it away. To that end, the stuff plugged into the USB hub is mostly charge cables, and the peripheral hardware is mostly wireless: Apple Magic Mouse and Keyboard, and a Corsair headset. A desk-mounted stand and a music-style stand hold the tablets I need for developing a cross-platform app at work.

And it happens that there’s an Amiga CD32 with its own mouse, keyboard, and joypad alongside: that mostly gets used for casual gaming.

Believe it or not, the pattern I’m trying to conform to here is “one desktop, one laptop”. All those streaming and gaming things are appliances for specific tasks, they aren’t a part of my regular computering setup. I’ve been lucky to be able to keep to the “one desktop, one laptop” pattern since around 2004, usually using a combination of personal and work-supplied equipment, or purchased and handed-down. For example, the 2004-2006 setup was a “rescued from the trash” PowerMac 9600 and a handed-down G3 Wallstreet; both very old computers at that time, but readily affordable to a fresh graduate on an academic support staff salary.

The concept is that the desktop setup should be the one that is most immediate and comfortable, that if I need to spend a few hours computering I will be able to get on very well with. The laptop setup should make it possible to work, and I should be able to easily pick it up and take it with me when I need to do so.

For a long time, this meant something like “I can put my current Xcode project and a conference presentation on a USB stick, copy it to the laptop, then go to a conference to deliver my talk and hack on a project in the hotel room”. These days, ubiquitous wi-fi and cloud sync products remove some of the friction, and I can usually rely on my projects being available on the laptop at time of use (or being a small number of steps away).

I’ve never been a single-platform person. Sometimes “my desktop” is a Linux PC, sometimes a Mac, it’s even been a NeXT Turbo Station and a Sun Ultra workstation before. Sometimes “my laptop” is a Linux PC, sometimes a Mac, the most outré was that G3 which ran OpenDarwin for a time. The biggest ramification of that is that I’ve never got particularly deep into configuring my tools. It’s better for me to be able to find my way around a new vanilla system than it is to have a deep custom configuration that I understand really well but is difficult to port.

I make it faster and easier for you to create high-quality code.
View all posts by Graham →
This entry was posted in Mac, meta-waffle. Bookmark the permalink.