The balloon goes up

To this day, many Smalltalk projects have a hot air balloon in their logo. These reference the cover of the issue of Byte Magazine in which Smalltalk-80 was shared with the wider programming community. 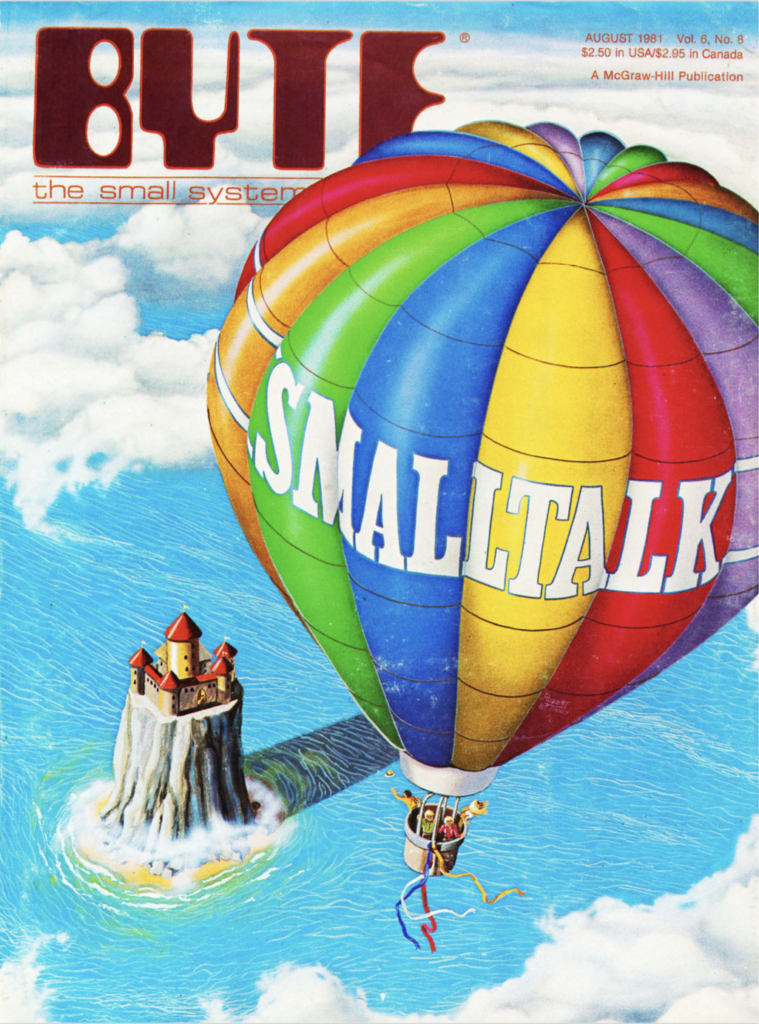 My answer is because they are used. Actually, Alan’s answer too:

So the death of Smalltalk in a way came as soon as it got recognized by real programmers as being something useful; they made it into more of their own image, and it started losing its nice end-user features.

I think there are two different things you want from a programming language (well, programming environment, but let’s not split tree trunks). Referencing the ivory tower on the Byte cover, let’s call them “academic” and “industrial”, these two schools.

The industrial ones are out there, being used to solve problems. They need to be stable (some of these problems haven’t changed much in decades), easy to understand (the people have changed), and they don’t need to be exciting, they just need to work. Cobol and Fortran are great in this regard, as is C and to some extent C++: you take code written a bajillion years ago, build it, and it works.

The academic ones are where the new ideas get tried out. They should enable experiment and excitement first, and maybe easy to understand (but if you need to be an expert in the idea you’re trying out, that’s not so bad).

So the industrial and academic languages have conflicting goals. There’s going to be bad feedback set up if we try to achieve both goals in one place:

Unfortunately at the moment a lot of languages are used for both, which leads to them being mediocre at either. The new “we’ve done C but betterer” languages like Go, Rust etc. feature people wanting to add new features, and people wanting not to have existing stuff broken. Javascript is a mess of transpilation, shims, polyfills, and other words that mean “try to use a language, bearing in mind that nobody agrees how it’s supposed to work”.

Here are some patterns for managing the distinction that have been tried in the past:

Anyway, I wonder whether that distinction between academic and industrial might be a good one to strengthen. If you make a new programming language project and try to get “users” too soon, you could lose the ability to take the language where you want it to go. And based on the experience of Smalltalk, too soon might be within the first decade.

I make it faster and easier for you to create high-quality code.
View all posts by Graham →
This entry was posted in tool-support. Bookmark the permalink.