This is “Pub Walks in Warwickshire”. NEW EDITION, it tells me! This particular EDITION was actually NEW back in 2008. It’s no longer in print. 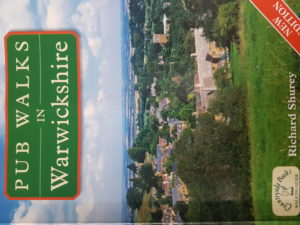 Each chapter is a separate short walk, starting and finishing at a pub with a map and instructions to find your way around the walk. Some of the instructions are broken: a farmer has put a barbed wire fence across a field, or a gate has been replaced or removed. You find when you get there that it’s impossible to follow the instructions, and you have to invent a new route to get back on track. You did bring a different map, didn’t you? If not, you’ll be relying on good old-fashioned trial and error.

Other problems are more catastrophic. The Crown at Napton-on-the-hill seems to have closed in about 2013, so an attempt to do a circular walk ending with a pint there is going to run into significant difficulties, and come to an unsatisfactory conclusion. The world has moved on, and those directions are no longer relevant. You might want to start/end at the Folly, but you’ll have to make up a route that joins to the bits described here.

This morning, a friend told me of a team that he’d heard of who were pulling 25 people in to a three-hour backlog grooming session. That sounds like they’re going to write the NEW EDITION of “Pub Walks in Warwickshire” for their software, and that by the time they come around to walking the route they’ll find some of the paths are fenced over and the pubs closed.

A lengthy, detailed backlog is not any different from having a complete project plan in advance of starting work, and comes with the same problems. Just like the pub walks book, you may find that some details need to change when you get to tackling them, therefore there was no value in spending the time constructing all of those details in the first place. These sorts of changes happen when assumptions about the organisation or architecture of the system are invalidated. Yes, you want this feature, but you can no longer put it in the Accounts module because you found that customers think about that when they’re sorting their bills, not their accounts. Or you need to put more effort into handling input from an external data source, because the way it really works isn’t quite the same as the documentation.

Or you find that a part of the landscape is no longer present and there’s no value in being over there. This happens when the introduction of your system, or a competitors’, means that people no longer worry about the problem they had back at the start. Or when changes in what people are trying to do mean they no longer want or need to solve that problem at all.

A book of maps and directions is a snapshot in time of ways to navigate the landscape. If it takes long enough to follow all of the directions, you will find that the details on the ground no longer match the approximation provided by the book.

A backlog of product features and stories is a snapshot in time of ways to develop the product. If it takes long enough to implement all of the features, you will find that the details in the environment no longer match the approximation provided by the backlog.

A Feeling of Confidence

We need to accept that people are probably producing this hefty backlog because they feel good about doing it, and replace it with something else to feel good about. Otherwise, we’re just making people feel bad about what they’re doing, or making them feel bad by no longer doing it.

What people seem to get from detailed plans is confidence. If what they’re confident in is “the process as documented says I need a backlog, and I feel confident that I have done that” then there’s not much we can do other than try to change the process documentation. But reality probably isn’t that facile. The confidence comes from knowing where they’re trying to go, and having a plan to get there.

We can substitute that confidence with frequent feedback: confidence that the direction they’re going in now is the best one given current knowledge, and that it’s really easy to get updates and course corrections. Replace the confidence of a detailed map with the confidence of live navigation.

A software team should still have an idea of where it’s going. It helps to situate today’s development in the context of where we think (but do not know) we will be soon, to organise the system into a logical architecture, to see which bits of flexibility Ya [Probably] Ain’t Gonna Need and which bits Ya [Probably] Are. It also helps to have the discussion with people who might buy our stuff, because we can say “we think we’re going to do these things in the coming months” and they can say “I will give you a wheelbarrow full of money if you do this one first” or “actually I don’t need that thing so I hope it doesn’t get in my way”.

But we don’t need to know the detailed steps and directions to get there, because building those details now will be wasted effort if things change by the time we are ready to tackle all of the pieces. Those discussions we’re having with the people who might buy our stuff? They might, and indeed probably should, change that high-level direction.

Think of it like trying to navigate an unknown landscape in fog. You know that where you’re trying to get to is over there somewhere, but you can’t clearly see the whole path from here. You probably wouldn’t just take a compass bearing and head toward the destination. You’d look at what you can see around, and what paths there are. You’d check a map, sure, but you’d probably compare it with what you can see. You’d phone ahead to the destination, and check that they expect to be open when you expect to get there. You’d find out if there are any fruitful places to stop along the way.

I make it faster and easier for you to create high-quality code.
View all posts by Graham →
This entry was posted in process. Bookmark the permalink.