The trouble with layers

In describing Inside-Out Apps I expressed my distrust of the “everything is MVC” school of design.

[…]when you get overly attached to MVC, then you look at every class you create and ask the question “is this a model, a view, or a controller?”. Because this question makes no sense, the answer doesn’t either: anything that isn’t evidently data or evidently graphics gets put into the amorphous “controller” collection, which eventually sucks your entire codebase into its innards like a black hole collapsing under its own weight.

As Possibly Alan, IDK and I discussed recently, the problem with box-and-arrow diagrams is that the boxes are really just collections of arrows zoomed out. Combine that with something my colleague Uri told me, that “a package in the dependency diagram is just the smallest thing that contains a cycle”, and you end up with your layer cake diagram looking like this: 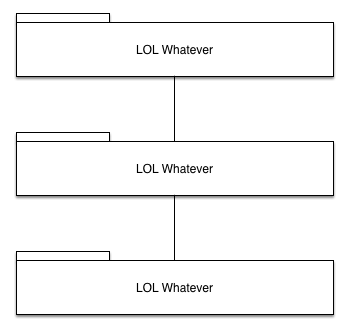 Three big wastelands of “anything goes”, with some vague idea that the one at the top shouldn’t talk to the one at the bottom. Or maybe it’s that any of them can talk down as much as they like but never up. Either way it’s not clear how any of the dependencies in this system are controlled. Is it “anything goes” within a layer? If two related classes belong in different layers, are they supposed to talk to each other or not? Can data types from one layer be passed to another without adaptation? Just what is the layer boundary?

I make it faster and easier for you to create high-quality code.
View all posts by Graham →
This entry was posted in architecture of sorts. Bookmark the permalink.